What does a woman want from a man most? 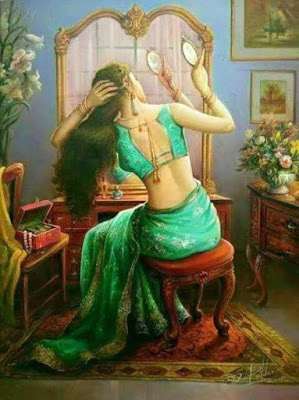 
King Harshavardhan was defeated in the battle.

The king kept a proposal for Harshavardhan and said, “ If you can answer me a question correctly I will return your kingdom or else leave aside the kingdom, you shall have to remain a prisoner for the rest of your life in my country.”

“The question is, ' what does a woman want from her man?' You will get a month of time to give the answer.”

He went to various places and met many scholars, preachers, priests, dancers,prostitutes, housewives,maids and many more to know what exactly a woman wants from a man.

If someone said she wants ornaments, the other would say she wants children from her man, another said beautiful house and family, yet another said she would like to have the throne etc. etc.

Harshavardhan was not satisfied with these answers at all.

The month was about to end and, Harshavardhan was unable to get a satisfactory answer.

Then someone informed that far away,in the neighboring state there lives a witch. Only she can give proper answer to this question. Hungry for an answer, Harshavardhan wasted no time. He along with his friend Siddhiraj went and met the witch.

When he asked the witch for an answer, she replied, “ I will give you the correct answer only if your friend agrees to marry me.”

The witch was old and extremely ugly. He didn't want this injustice to happen with his friend.

But to save his friend and the king of his country, Siddhiraj gave his consent to marry the witch and the marriage happened.

The witch then answered Harshavardhan and said,


“A woman wants to be independent so that she can take decisions on her own.”

On the other side, the witch on her wedding night said to her husband, “You have a pure heart. You have sacrificed yourself to save your friend, so, I want to tell you something.”

“Everyday, I look ugly for 12 hours and extremely beautiful for the next 12 hours. Tell me, which look would you like to accept.”

Siddhiraj said, “ That is your decision dear. I have accepted you as my wife,so, I would like you anyway. ”

Hearing this, the witch transformed into a beauty and said, “ You have allowed me to take the decision, therefore, from now I shall always remain beautiful.”

“Actually this is my real look. I had changed my appearance into ugly witch for the ugly people all around.”